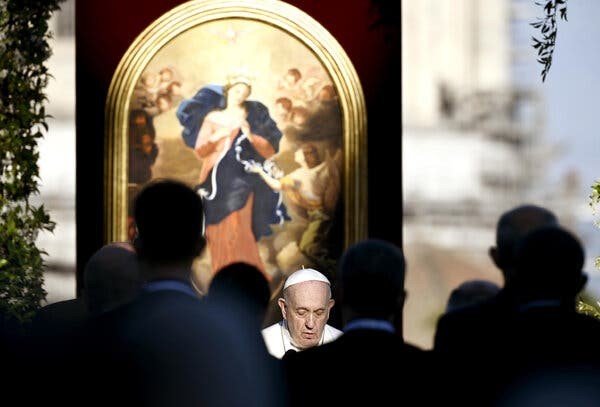 The new rules explicitly criminalize the sexual exploitation of adults by priests who abuse their authority, and the changes also apply to laypeople with power in the church.

Pope Francis leading a prayer in May in the Vatican gardens. He has said the new rules were the result of 14 years of study.

ROME — Pope Francis has broadened the Roman Catholic Church’s definition of sexual abuse by revising its penal code to explicitly acknowledge that adults, and not only children, can be victimized by priests and powerful laypeople who abuse their offices.

The Vatican announced on Tuesday that Francis had made changes to the Vatican’s Code of Canon Law, the legal framework for the world’s 1.3 billion Catholics, after years of consultations.

The revisions — the first since 1983 — are part of the church’s continued process of seeking to address gaps in its response to the sexual abuse scandal that has devastated the Catholic church over the last quarter century.

The changes reflect a new appreciation in the church that imbalances in power dynamics can be a key factor in sexual abuse, stemming in part from revelations in recent years that the church had failed to respond when adult seminary students were abused by powerful prelates, such as the disgraced former cardinal archbishop of Washington, Theodore E. McCarrick.

“It is necessary that these norms be closely related to social changes and the new needs of the People of God,” the pope wrote last month in a text the Vatican made public on Tuesday.

But the impact of the new rules could stretch much further than seminaries and reach into the pews of parishes around the world, church analysts say.

Adult women and men in the church’s rank and file could begin in large numbers to accuse of manipulation and abuse not only clerics, but also laypeople such as church administrators or the leaders of Catholic movements. While the clear cut crime of child abuse was often difficult for the church to adjudicate, the sexual abuse of an adult can be far murkier, experts in sexual abuse say.

With Tuesday’s announcement, Francis is doubling down on his view that the sexual abuse crisis is primarily a consequence of clerics and other church leaders abusing their power.

But he is also inserting his church into the slippery terrain of the #MeToo era, and asking church authorities to determine fault and judge grievances in an illicit relationship between an adult parishioner and a priest, or a layperson working for the church.

Nicholas P. Cafardi, a prominent canon lawyer in the United States, said the revisions to the code made it more “conforming to today’s expectations of professionals.” The priest and parishioner dynamic “certainly is a power relationship,” he said.

The updated norms met with approval from some of the Vatican’s most consistent critics.

“This is an important step forward in acknowledging the true scope of abuse within the Catholic Church,” the Survivors Network of those Abused by Priests said in a statement. But, the group added, “The changes announced by the Vatican are only as good as their enforcement.”

The new laws do not take effect until Dec. 8.

Church law previously considered sexual relationships between clerics and consenting adults as sinful, but not a crime (though rape and assault were already considered crimes). Often, offending clerics were forced to go to counseling, but in practice, it was rarely seen as an offense grave enough to be removed from the priesthood. Defrocking a priest is among the most severe punishments in canon law.

In recent years, Pope Francis seems to have made strides to overcome what many saw as a dangerous blind spot when it comes to the plague of abuse. He has cracked down on the sexual abuse of minors by passing church laws to punish bishops and religious superiors for negligence and failing to protect their flocks from predators.

He convened a major global church summit on abuse in 2019, and subsequently introduced laws requiring priests and nuns to report abuse accusations to church authorities.

Critics have called on the Vatican to require reporting to civil authorities, but the church has resisted, saying that it is a global institution, and in many countries such reporting would expose accused clergy to great harm.

The Rev. Hans Zollner, one of the leading church authorities on sexual abuse, said that the inclusion of adults in the new laws “is in line with the development over the last four years” of the #MeToo movement and the attention given to the abuse of adult seminarians.

But he said that the new law’s broad definition of the adults who may be subjected to the abuse of power by clerics and laypeople was insufficiently clear.

The problem, he said, is “if everyone can claim to be abused in any situation, how do you prove that? It is very foggy.” He added, “Some things aren’t as clear as you think or may wish for them to be.”

Msgr. Juan Ignacio Arrieta, secretary of the Vatican’s legal office, said in a statement that the law applied to any adult in the church who can demonstrate that a cleric or religious leader committed sexual abuse “with violence or the abuse of authority.”

The revisions also officially criminalize for the first time the practice of what is known as “grooming” — building relationships with young people in order to exploit them, sometimes by showing them pornography.

The new law also extends harsh penalties to lay leaders in the church who, though not priests, exercise considerable power by holding church office or by leading lay religious movements. While those people cannot be defrocked, they will be justly punished, the law says.

In his remarks, Francis said he hoped the law would be applied to priests “when necessary, with justice and mercy,” adding that a pastor had the responsibility to “impose penalties when the good of the faithful demands it.”

The new law also strengthens the right of the accused to defense, clarifies the statute of limitations for trying crimes and more clearly defines penalties and sentencing guidelines, Francis wrote in his May 23 document.

The new guidelines remove the discretion previously given to bishops and other church leaders that allowed for offenders to sidestep accountability and church authorities to cover up abuse.

The new law makes clear that the failure to investigate and punish offending priests will have consequences, and seeks to speed up a process that victims and their advocates have criticized as lengthy and cumbersome.

The changes in canon law also take aim at a completely different problem the church has identified only relatively recently: the growing movement of women who claim they have been ordained as priests. The Vatican’s doctrinal office issued a decree in 2007 saying that “a person who attempts to confer a sacred order on a woman, and the woman who attempts to receive the sacred order,” should trigger automatic excommunication. These revisions now incorporate that decree into church law.

Liberal Catholics are pushing for the pope to allow women deacons, a proposition currently being studied by a Vatican commission. Asked Tuesday if the automatic excommunication applied to deacons, Vatican officials said it depended on the outcome of the church commission.