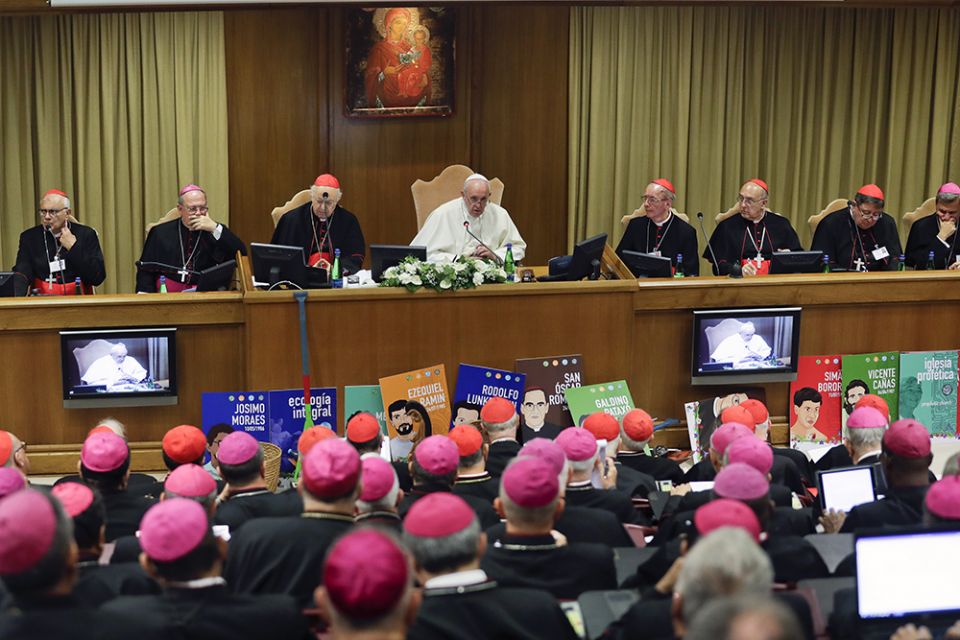 Vatican City — The synod of bishops meeting in Rome voted on Oct. 26 to recommend the pope allow the ordination of married men as Catholic priests in the Amazon region.

They also voted to put the church strongly on the side of protecting the Amazon rainforest and the indigenous people living there.

The synod, made up mostly of bishops from the Amazonia, was called by Pope Francis to deal with issues facing the church in the Amazon region. The synod concludes its three weeks of meeting with a celebratory Mass on Oct. 27.

The synod has no decision-making authority.

So it is up to the pope whether their recommendations are approved.

At the end of the Saturday session, the pope gave his reactions to some of the recommendations, but he did not mention married priests. He probably wants to consult with others, including bishops’ conferences, before making a decision that could have ramifications elsewhere.

Unless he gets a strong negative response, he will probably approve the synod’s recommendation.

The recommendation for ordaining married men passed by a vote of 128-41, though it had the highest number of negative votes for any recommendation. It was hedged with the qualification that the married priests would work “in the most remote areas of the Amazon region.”

But many people believe the ordination of married men would eventually spread to meet pastoral needs elsewhere.

This is the first time in centuries that an official church body has recommended the ordination of married men in the Catholic Church. In the early church, most priests were married, including St. Peter, the first pope, and all the apostles except John.

The practice of celibacy spread in the early church until it became the universal law of the Western church in 1123. The Eastern or Orthodox churches never had this rule. During the Reformation, Protestant churches rejected celibacy.

The bishops did not recommend allowing priests to marry. Marriage would have to take place before ordination, as is the practice in the Eastern churches.

The practice of celibacy is a church law, not doctrine, so it can change. The Eastern churches in union with Rome have always had a married clergy. Last year, a CBS News poll [2] found that nearly 70% of American Catholics supported allowing married priests.

The bishops noted that the Eucharist is essential to the life of a Catholic community, but “many of the ecclesial communities of the Amazonian territory have enormous difficulties in accessing the Eucharist.”

“Sometimes,” they said, “it takes not just months but even several years before a priest can return to a community to celebrate the Eucharist, offer the sacrament of reconciliation or anoint the sick in the community.”

To live with and serve these communities, the bishops recommended married priests.

The bishops also spoke of the importance of proper training of these men, not only in theology, but also in pastoral practice so they would listen and serve their people and not suffer from the sin of clericalism. The first to be ordained would probably be married deacons who already have training and pastoral experience.

The synod also noted that in large numbers of the consultations carried out in the Amazon, “the permanent diaconate for women was requested.”

In 2016, the pope created a commission to study the possibility of women deacons, and by a vote of 137-30, the synod said, “We would therefore like to share our experiences and reflections with the commission.” This was the second-highest number of negative votes for any recommendation. The pope agreed to continue studying the possibility of ordaining women deacons. The women diaconate has not been a priority for Francis in the past, but the synod’s support may result in it getting more attention.

The bishops also recommended that the celebration of the Eucharist and the sacraments be done in a way that respects the cultural identity of the people in the Amazon. This may include a special indigenous rite that comes from their culture, just as the 23 other rites in the Catholic Church reflect the cultures of their people.

“We must give an authentically Catholic response to the request of the Amazonian communities to adapt the liturgy by valuing its worldview, traditions, symbols and original rites that include transcendent, community and ecological dimensions,” said the bishops.

In his response at the end of the synod, the pope indicated openness to this idea and said it could be dealt with by the Vatican Congregation for Divine Worship. The congregation’s current leadership is opposed to indigenous rites, so the pope would have to appoint a new prefect if anything is going to happen.

The bishops also felt passionate about the Amazon rainforest and its people.

“The Amazon today is a wounded and deformed beauty, a place of suffering and violence,” they said. “Attacks on nature have consequences on the lives of peoples.”

Coming from the Amazon region, they see the following threats to life: “appropriation and privatization of natural goods, such as water itself; predatory hunting and fishing; unsustainable mega-projects (hydroelectric and forest concessions, massive logging, monocultures, roads, waterways, railways, and mining and oil projects); pollution caused by the extractive industry and city garbage dumps; and, above all, climate change.”

The indigenous have suffered not only the loss of their ancestral lands, but also their lives and their cultures as they were killed or forced to migrate to cities where, rather than finding opportunities, they were exploited and even trafficked.

“Behind all this,” the synod said, “are dominant economic and political interests, with the complicity of some governors and some indigenous authorities.”

The Amazonian bishops plan to continue speaking out prophetically against the destruction of the environment and the exploitation of the indigenous peoples. They call on their governments to do more to protect the rainforest and its people.

“We denounce the violation of human rights and extractive destruction,” they said. “We make our own and support campaigns to disinvest in extractive companies responsible for the socio-ecological damage of the Amazon, starting with our own church institutions themselves.”

But they also recognize that unless people in the developed world (America, China, Europe and Japan) change their lifestyles, there is little they can do to stop the economic interests feeding these lifestyles.

The developed world’s appetite for meat, lumber and precious minerals is killing the rainforests and their people. These countries also contribute heavily to global warming that could kill the rainforest.

The bishops recognize that scientific and technological expertise alone will not save the Amazon.

“The defense of the life of the Amazon and its peoples requires a deep personal, social and structural conversion,” they say.

This requires recognition of our “sins of commission and omission against God, against one’s neighbor, the community and the environment.” It will take, they say, a conversion of hearts and minds based on gospel values that respect God’s creation and the most marginalized.

In recent years, Catholics have been embarrassed by the crimes and sins of their church. While these issues continue to need the church’s attention, Catholics can be proud that their church is also confronting critical global issues like the environment, climate change and the rights of indigenous peoples.

The bishops, under the leadership of Francis, have once again found their prophetic voice, at least in the Amazon.

[Jesuit Fr. Thomas Reese is a columnist for Religion News Service and author of Inside the Vatican: The Politics and Organization of the Catholic Church.]