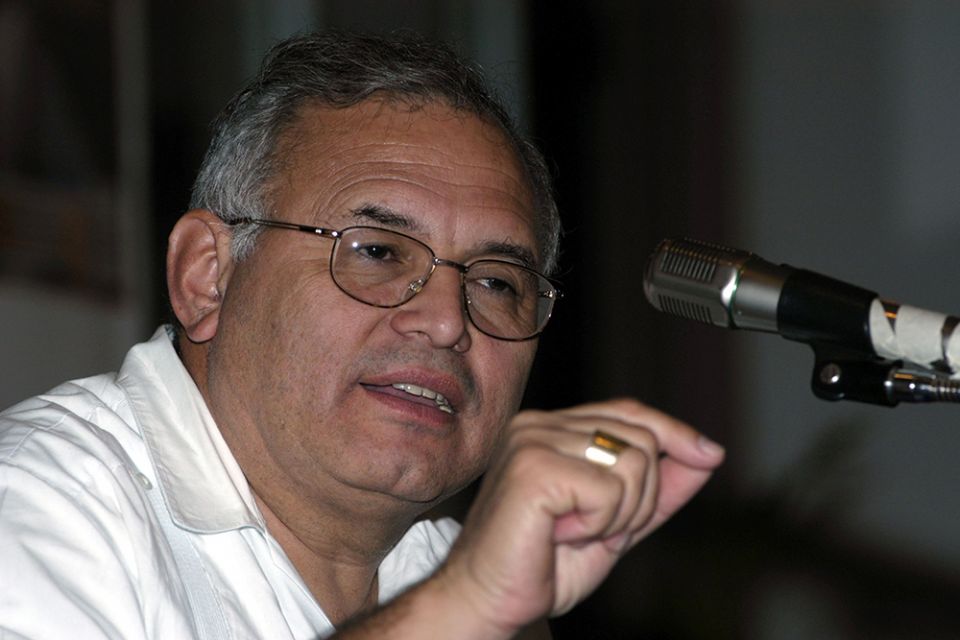 Huehuetenango, Guatemala — “May I join you?”

The first words of the future cardinal, Guatemalan Bishop Álvaro Ramazzini, to the future pope, Argentine Bishop Jorge Mario Bergolio, were spoken in a dining room during a 1990s bishops’ synod in Buenos Aires, where Bergolio sat alone. Beginning with that conversation, the men came to know each other. On Sept. 1, Pope Francis named Ramazzini a cardinal, sending a strong message to the rest of the Americas. For more than 30 years, Ramazzini has stood with the poor, weathering death threats as a peace mediator, a champion of social justice and the environment, and defender of the indigenous.

In an interview in his diocesan office in Huehuetenango, a few days after Francis named 13 new cardinals including Ramazzini, 72, the Guatemalan prelate showed that he has shared the pope’s agenda for decades.

High among priorities for both men is migration, which Ramazzini considers “the inalienable right to live,” even if people must pull up roots and move. In 2012, Ramazzini became bishop of the gravely impoverished Huehuetenango, one of 22 departments (administrative subdivisions) in Guatemala, the largest country in Central America. Huehuetenango sends out more migrants than any other Guatemalan department. The new cardinal’s own mother and siblings emigrated to the United States when circumstances thrust the family into poverty decades ago.

Under the “safe third country” agreement signed in July by U.S. Department of Homeland Security Acting Secretary Kevin McAleenan and Guatemalan Interior Minister Enrique Degenhart, unauthorized immigrants from Honduras and El Salvador are set to be deported from the United States to seek “asylum” in Guatemala. The agreement faces legal challenges, but meanwhile the specter arises of conflict for scarce jobs, even concentration camps, which Ramazzini said is “one of my fears.”

“We already have them in Mexico,” he said, referring to hundreds of Africans and Haitians being detained in Tapachula, on the border with Guatemala, forbidden to move. In August migrants in Tapachula issued a statement reported by the Mexico City daily, La Jornada, saying they “suffer an unbearable humanitarian situation. … We feel despair, fear, hopelessness.” A Voice of America video shows black people fighting hand to hand with Mexican police in riot gear.

The idea of Guatemala as a “safe third country” appears absurd and dangerous; since Sept. 7 about a third of the country has been under a state of siege, allegedly to control drug traffickers. “The government can’t even solve our Guatemalan problems, how are they going to help the people coming from outside?” Ramazzini asked. “How are we going to employ these people? Who is going to feed them? Who is going to give them medical services?”

Xenophobia is another risk. An influx of deportees from the United States is “a moment to see what kind of Christians we are in this country,” Ramazzini said, “to go forth in helping these people.”

Long preoccupied by destruction of the “richness of the creation that God has given us,” Ramazzini said that in October, he and other bishops from Central America and Mexico will call for a Mesoamerican synod along the lines of the upcoming Amazonian synod. The Mesoamerican synod will discuss the climate emergency, pollution and man-made destruction of jungles and other regional natural habitats, home to indigenous peoples, and disappearing, like the Amazon. The preliminary encuentro, or meeting, of the Mesoamerican network is to take place in Mexico, but the environment problem is widely shared.

“Look right here,” the cardinal said, gesturing outside his office to the departmental capital. “You go out and there is smoke all around.” Many in Huehuetenango, he said, have no have no usable water, because it is contaminated.

When the Guatemalan government opened land in its Petén rainforest in the 1960s, a teenage Ramazzini accompanied his father to have a look, and he was struck by the beauty of the place, the living things it contained. Two years ago, when he returned to Sayaxché, in the Petén on the Passion River, he said, “What sadness it gave me! All that jungle was now vast grazing land for cattle.” Stretches of rainforest had been cut down by wealthy entrepreneurs for the steak and hamburger market. “How many Guatemalans have the money to buy the meat from that cattle?” he asked.

Closely tied to environment concern is the welfare of indigenous people — 23 language groups in Guatemala alone — whose culture, ancient cosmovision and continued existence may depend on reversing the destruction. Abuelos, older, wise men and women in Maya Indian communities here often say, “We take care of the earth and the earth takes care of us.” The vision is familiar to Ramazzini.

“In the theology of Laudato Sí is a great advance,” he said, referring to Pope Francis’ 2015 encyclical, subtitled “On Care for Our Common Home.” “It says we are not the owners of creation.” We are “not even the administrators” of creation, but its “caretakers.”

Ramazzini emphasizes the “interconnection that exists between everything that is creation, everything.” When we forget that, he said, we break the connections, violating the harmony of the universe. The theme of the ecological crisis is, he said, “the theme of disharmony … in the fullest sense of the word.”

He offers a description of “indigenous theology,” which the Synod of Bishops for the Amazon respects, but critics disparage as pantheistic, pagan. “We refer [by this] to the experience of Christians that have the capacity to discern the presence of the revelation of God in the cultural expressions of the original peoples,” in which there is “a profoundly religious component.” These religious experiences contain “elements and content that in no way contradict what we as Christians profess, and on the contrary, many of these elements enrich our way of understanding and living the Christian experience.”

The “virulent” opposition of some to the Amazonian synod, he said, is “the fruit of ignorance, the fruit of not sharing the lives of these people.”

Ramazzini has shared “the lives of these people.” In 1988, as a newly named bishop for the rural department of San Marcos, next door to Huehuetenango, he began a three-year project of traveling on foot to a hundred communities “to eat what the people eat, sleep where the people sleep, to put myself into their lives. Because I said, ‘if I, as the bishop, don’t know the reality of the lives of the people I serve, what kind of service am I going to be giving?’ ”

Climbing to a village on a volcano, he stopped a man coming down and asked what he carried in the cloth bundle on his back. ” ‘My daughter, she’s sick, I’m taking her to the health center,’ he said. He had to walk another two and a half hours.” Ramazzini asked to see the girl in the bundle. She was dead. The father knew, but someone had to register the 10-month-old’s death, he said, and his wife and other children were all down with the same sickness, measles. “That a child dies of measles in the fullness of the 20th century, incredible,” Ramazzini said. When he told the story, Ramazzini’s face showed the wonder and stark realization he might have had at the moment he saw the dead child. He wasn’t able to help — the village had no medicine, no telephone. He learned later that the wife and two more children died.

Ramazzini said the encounter on the mountain was one of several experiences that awoke his social consciousness. Also among them was his own family’s poverty, “which forges one’s heart, because you don’t feel superior to others.” He also credits instruction from a Canadian Sulpician seminary professor, Edmundo Cormier, who “inculcated in us a sensitivity to social problems,” but was told to leave the country by “persons who did not want to hear anything about the church’s need to commit itself to social issues”; and to Guatemala’s civil war, in which some 200,000 died or disappeared, mostly civilians. Ramazzini saw up close the conditions of fighters on both sides when he mediated a prisoner exchange, and saw the conditions of terrified civilians when he brought Mass and the sacraments to war zones.

Like most other Guatemalan bishops, Ramazzini organized parishes to collect granular information about the violence, and reconcile perpetrators and victims, for the Recuperation of Historical Memory Project initiated by Guatemala City Archbishop Juan José Gerardi, who was murdered two days after he publicly presented the findings in the national cathedral.  As cardinal, with “access, more rapidly … with greater weight, to the very offices of the Vatican,” Ramazzini said, he can push for the cause of Gerardi’s canonization.

Ramazzini said he believes becoming a cardinal gives him “a certain protection” from death threats. “Of course, you never know, they killed Cardinal Posadas in Mexico,” he added, as if in an afterthought. In 1993 Guadalajara Cardinal Juan Jesús Posadas Ocampo was gunned down, perhaps by drug traffickers.

“God has plans for the lives of everyone,” Ramazzini concluded. “If I try to do what God asks of me, then whatever happens, happens. We have to pass from the shadow of this life to enter eternal life one way or another. So I can enter saying, at least, Lord, I tried to do things the way you asked me to. Period.”