X-ray of a Pope 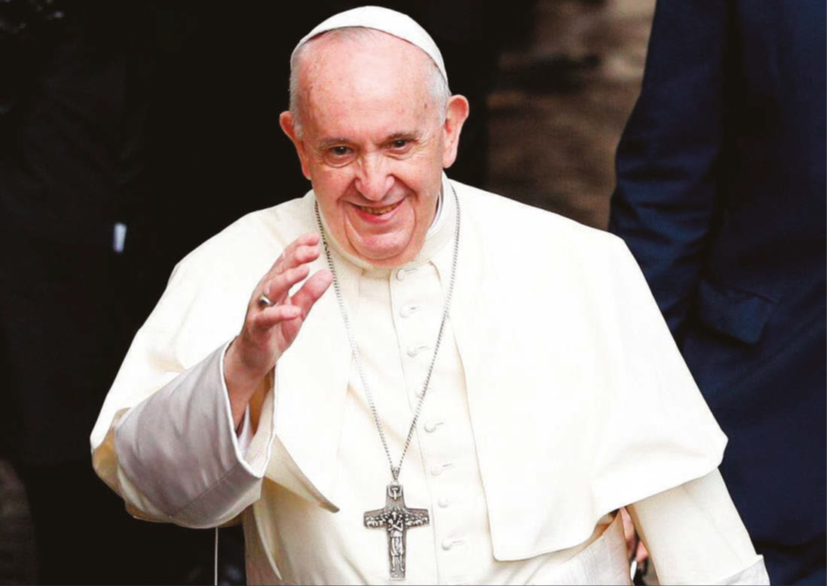 XRay of a Pope

No pope has spoken with such candour about his health, physical and mental, as Francis. A papal biographer sums up the diagnosis / By AUSTEN IVEREIGH

DURING Pope Francis’ March visit to Iraq, when he seemed to be suffering more than usual from sciatica, a colleague in Rome who is in regular touch with him prayed that she might  take some of his pain on herself. In April she found herself with an excruciating bad back, needing a series of injections and hobbling about. When she told Francis, when he next called, he roared with laughter: “So that’s why I’ve had no pain recently!” Careful what you pray for: it may be hard to contain. I spent most of April being treated for a herniated disc that sent pain shooting down the sciatic nerve into the legs. At the time, I blamed a tonne bag of mulch destined for newly planted trees, but let’s not scapegoat the bark-chip. Fact is, sedentary quinquagenarians cannot spend all day outside putting weight on their lower backs without paying a price.

But it made me wonder: how does Francis get through this? Prostrate, I downloaded a March 2019 interview he did with an Argentine doctor-journalist friend. It comes at the end of Nelson Castro’s La Salud de los Papas, a book on the health of the popes since Leo XIII. A couple of months ago, my eyes might have glazed over a lot of this information (old men’s issues, right?). But when Francis tells Castro that he has a long-standing narrowing of the intervertebral disc between the fourth and fifth lumbar vertebrae, and for years has had physiotherapy to elongate the dura mater (the connective tissues underneath the bones of the skull and the vertebral column) in order to keep the spine in place – well, the detail seems more relevant, somehow. You can’t read this interview without being struck by two things in particular. The first is how freely and transparently Francis discusses his various conditions, physical and psychological. Imagine any other head of state laying themselves bare this way: Biden? The Queen? How far we are from the Vatican refusing to confirm the Parkinson’s everyone could see in the face of John Paul II: in this case, the laying-bare is the Pope’s own idea. “You should write a book on the health of the popes,” Francis told Castro at a Wednesday audience in St Peter’s Square in October 2017. “You can start with me: I’ll tell you all about my neuroses.”

The stories are familiar, at least to this biographer: the brutal lung operation aged 21; the psychiatrist he saw in the 1970s; the almost fatal gallstone infection at the end of his time as Jesuit provincial; the flat foot for which he has orthopaedic shoes; as well as the Chinese acupuncturist who treated him as archbishop (for his back problems: not, as I had been told, for his heart, although the heart was an issue briefly in 2004, following a slight narrowing of the anterior descending coronary artery). Because Castro is a doctor, Francis feels free to let loose intricately detailed medical information that fills in many of the gaps. And that’s the second thing that strikes me: Francis’ knowledge and memory of the most obscure details. Which of us, surviving a brush with death and months of post-op agony aged21, would decades later recall that our lung operation involved the forceful use of a rib spreader known as a Finochietto retractor and an incision made first at the base of the right-hand hemithorax? But Bergoglio – a trained chemist – remembers every detail as if it were yesterday. The recovery was complete and has never limited his activities, he tells Castro, adding that as Pope he has never had to restrict or cancel his trips or activities due to breathing difficulties. But that isn’t quite the whole story. Shortly after his election, Francis told Bolivian archbishop Edmundo Abastoflor that in 1979 he had nearly died after stepping off a plane at La Paz’s oxygen-starved airport, El Alto, the world’s fifth-highest, at 13,300 feet. The Jesuits in Bolivia confirmed the story to Abastoflor: Bergoglio, still then provincial, had lost consciousness; only an oxygen mask and a rapid flight to lowland Cochabamba had saved him.

In my book Wounded Shepherd, I recount the astonishment of Abastoflor and the other bishops when Francis insisted on including La Paz in his papal trip to South America in July 2015. If he had collapsed in his forties, how much more likely was it that he would again in his eighties? Leaving nothing to chance, they hid oxygen tanks among the flowers at the cathedral, and had an air ambulance on standby. But Francis was fine, less affected by soroche (altitude sickness) than many of the journalists. The grace of office? Maybe. But Francis supplies a scientific reason. According to doctors, his right lung has grown back to cover the homolateral hemithorax to the point where it would be hard to know the operation ever took place. Francis’ supposedly malfunctioning or absent lung – a journalistic cliché wheeled out whenever there is speculation about his age or retirement – is an urban myth.

FRANCIS’ MAJOR issue is that long-standing weakness in the vertebral column that creates the sciatica. This is not, by the way, why he has a somewhat rocking gait: that’s the flat foot. “When you see me walking like a broody chicken, it’s because of that affliction,” he tells Castro. The problem has grown worse with the years, but he has resisted an operation. Francis was given a thorough medical check-up after his election that included xrays of his spine. His doctor sent the x-rays to a well-known specialist, without saying whose spine it was. The specialist reported back that the anonymous patient was clearly in a very serious condition, and presumably wheelchair-bound. Informed whose spine it was, the specialist asked to see Francis. After examining him, he concluded that the para -vertebral muscles had strengthened over the years to the point where they have held the vertebral column and avoided a collapse. But this has only been achieved by regular physio – therapy, which he continues to have (“this is sacred”) twice a month, working on the dura mater. The result, he says, is that he seldom suffers from much pain. Overall, Francis seems pretty robust. He was overweight for a time because of hepatic steatosis (fatty liver) which was successfully treated with a change of diet. He sleeps deeply, never needing pills, after going to bed at nine, and reading for an hour. Six hours later he wakes at 4 a.m. on the dot. Straight after lunch he takes a 45-minute siesta. “I go to my room, take off my shoes, and lie down fully dressed. I sleep deeply, as if it were night-time. And I get up feeling good: with a clear head and reinvigorated, as if it were morning again.”

The revelation that Francis had had weekly sessions with a woman who was a doctor and a psychoanalyst for six months during the military dictatorship, when he was 42, was made by the French sociologist Dominique Wolton in a book-length interview in 2017. Francis told Wolton the reason he went was “to clarify a few things”. He tells Castro the Jewish woman he saw weekly was a psychiatrist rather than a psychoanalyst, and that she helped him cope with the extreme anxiety of ferreting people wanted by the military out of the country to safety: “Imagine what it’s like to drive with someone hidden in your car, covered in just a blanket, through three checkpoints around the Campo de Mayo,” he says, speaking of the vast military HQ close by the Jesuit Colegio Máximo in San Miguel, where Bergoglio was based. She taught him coping mechanisms to help prevent him making rushed decisions while experiencing surges of fear. (Francis is convinced that priests should have a good grasp of human psychology. “There are some who acquire that knowledge over time, but priests should study psychology.”) Her lessons have stayed with him. “You have to make your neuroses a nice cup of tea (cebarles mate), and also caress them,” he jokes. “They are your lifelong companions.” Of the various kinds of neurosis – anxiety, depressive, obsessive-compulsive, posttraumatic – Francis identifies his as anxiety: “wanting to do everything here and now”. But by now he has his “well under control”: facing a problem that makes him anxious, he has strategies, like listening to Bach. “It would be dangerous and damaging if I made decisions in a state of anxiety,” he says, adding that the same would be true in a state of sadness brought on by an apparently insoluble problem. As Jesuits say, you need to avoid making decisions in desolation. “When I make a difficult decision, I let it mature inside me,” he tells Castro. “It’s then that, after some time, I get flooded with a sense of security that the decision I’ve made is the right one.” He knows he can be stubborn: obstinacy in others bothers him “because at the end of the day I see in it a reflection of my own”. What helps is “dialogue with people who think differently from me”. Dialogue “helps me in the maturing of a decision and constitutes the main antidote to the sickness of power”. When Castro asks him if he finds in prayer the kind of relief that others might find in, say, psychotherapy, the Pope is clear: “Prayer for me is more than that, because it puts a person in another dimension.” Is prayer healing? “Prayer allows Jesus to enter us,” Francis says. “And that is always good.”