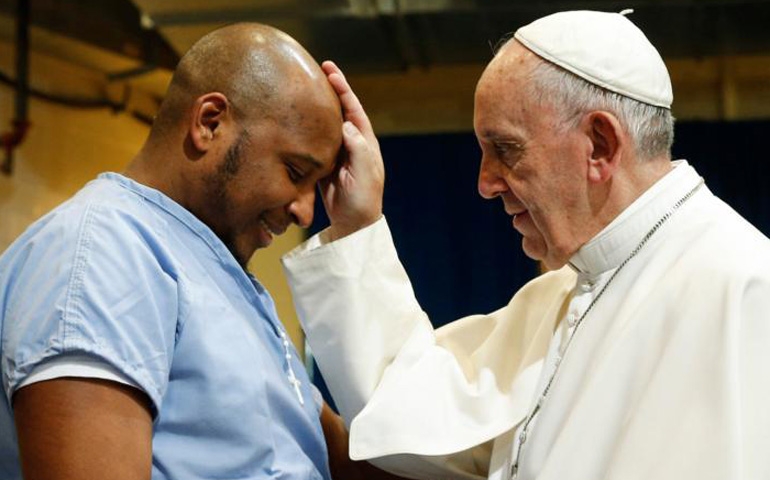 1) Rebel against the tyranny of money!

After the first two meetings – Rome, 2014 and Santa Cruz (Bolivia), 2015 -, the Third World Meeting of Popular Movements took place in Rome from November 3 to 5. About 200 activists from the poorest of the Earth (cartoneros, trash recyclers, street vendors, landless peasants, indigenous people, the unemployed, slum dwellers, neighbors of popular settlements, etc.) from 92 popular movements from 65 Countries of the five continents.

The issues addressed were, as in the two previous meetings, the so-called three “T”: “Trabajo, Techo, Tierra” (“Work, Roof, Earth”), to which the issues of “democracy and people” were added this time; The “care of the environment and nature”; And “migrants and refugees”.

The participants met for the first two days at the International Pontifical College Maria Mater Ecclesiae located at Via Aurelia Antica in Rome (headquarters and major seminary of the “Legionaries of Christ” …).

Among the participants were: Juan Grabois, reference of the Confederation of Workers of the Popular Economy (CTEP) and of the Movement of Excluded Workers (MTE) of Argentina; João Pedro Stédile, of the Movement of the landless peasants of Brazil and of the international organization Vía Campesina; Vandana Shiva, Indian philosopher and ecologist, Alternative Nobel Prize in 1993; And José “Pepe” Mujica, former president of Uruguay.

On November 5, already in the Vatican and after a Mass in St. Peter’s Basilica which was accessed by the Holy Door of Mercy, all participants, plus some three thousand activists from the Italian social movements , Were received in audience, in the immense Paul VI Hall, by the Pope.

In his synthesis, Francisco began by recalling “the ten points of Santa Cruz de la Sierra, where the word change was pregnant with great content, was linked to fundamental things: decent work for those excluded from the labor market; Land for peasants and indigenous peoples; Housing for homeless families; Urban integration for the popular neighborhoods; Eradication of discrimination, violence against women and new forms of slavery; The end of all wars, organized crime and repression; Freedom of expression and democratic communication; Science and technology at the service of peoples “.

And he defined “a project of life that rejects consumerism and regain solidarity, love between us and respect for nature as essential values. It is the happiness of ‘living well’ what people claim, the ‘good life’, and not that selfish ideal that deceitfully inverts words and proposes the ‘good life’ to us. ”

What did the pope say to the poor? Essentially four things:

1) Rebel against the tyranny of money! “There is a basic terrorism that emanates from the global control of the money on the earth and it attacks against the whole humanity. Terrorism, state terrorism, and what some erroneously call ‘ethnic terrorism’ or ‘religious’, but no people, no religion, is a terrorist. True, there are small fundamentalist groups everywhere. But terrorism begins when ‘you have rejected the wonder of creation, man and woman, and you have put money there’. The whole social doctrine of the Church rebels against the idol-money that reigns instead of serving, tyrannizing and terrifying humanity.

No tyranny is sustained without exploiting our fears. This is key. Hence all tyranny is a terrorist. And when that terror, which was sown in the peripheries with massacres, looting, oppression and injustice, explodes in centers with different forms of violence, even with hateful and cowardly attacks, citizens who still have some rights are tempted with false security Of the physical or social walls. Walls that enclose some and banish others. Citizens walled, terrified, on the one hand; Excluded, exiled, even more terrified, on the other.

We must help the world heal itself of its moral atrophy. This atrophied system can offer certain cosmetic implants that are not a true development: economic growth, technical advances, greater ‘efficiency’ to produce things that are bought, used and disposed of, encompassing all of us in a vertiginous discarding dynamics … but this World does not allow the development of the human being in its entirety, development that is not reduced to consumption, which is not reduced to the welfare of few, which includes all peoples and people in the fullness of their dignity, enjoying fraternally the wonder Of Creation. That is the development we need: human, integral, respectful of Creation, of this common house. ”

2) Show solidarity! “What happens to the world today that, when a bankruptcy occurs, there are immediately scandalous sums to save it, but when this bankruptcy of humanity occurs, there is almost a thousandth part to save those brothers who Suffer so much? And so, the Mediterranean has become a cemetery, and not just the Mediterranean … so many cemeteries by the walls, walls stained with innocent blood. Fear hardens the heart and becomes blind cruelty that refuses to see the blood, the pain, the face of the other.

What is to be done to deal with this tragedy of migrants, refugees and displaced persons? I ask you to exercise that special solidarity that exists among those who have suffered. You know how to recover bankruptcy factories, recycle what others throw, create jobs, tillage the land, build homes, integrate segregated neighborhoods and claim relentlessly like that widow of the Gospel who calls for justice insistently. Perhaps with your example and your insistence, some States and international organizations will open their eyes and take appropriate measures to welcome and fully integrate all those who, from one circumstance or another, seek refuge away from home. And also to face the root causes that thousands of men, women and children are expelled every day from their homeland.

3) Revitalize democracy! “The relationship between people and democracy. A relationship that should be natural and fluid but that runs the risk of fading to unrecognizable. The gap between peoples and our present forms of democracy is growing more and more as a result of the enormous power of economic and media groups that seem to dominate them. Popular movements are not political parties and, to a large extent, their wealth lies in this, because they express a different, dynamic and vital form of social participation in public life. But do not be afraid to get into the big discussions, in Politics with a capital letter, and I quote Paul VI: “Politics offers a serious and difficult way – although not the only way – to fulfill the grave duty that Christians and Christians have to serve The others’ (2). Or that phrase that I repeat so many times: “Politics is one of the highest forms of charity, love.”

You, the organizations of the excluded and so many organizations from other sectors of society, are called to revitalize, to re-found the democracies that are going through a real crisis. Do not fall into the temptation of the corset that reduces them to secondary actors, or worse, mere managers of the existing misery. In these times of paralysis, disorientation and destructive proposals, the leading participation of the peoples who seek the common good can overcome, with the help of God, the false prophets who exploit fear and despair, who sell magic formulas of hatred and Cruelty or selfish welfare and illusory security.

We know that as long as the problems of the poor are not radically resolved, giving up the absolute autonomy of markets and financial speculation and attacking the structural causes of inequity, the problems of the world will not be solved and, in short, no problem. Inequity is the root of social ills. ”

Anyone who has too much attachment for material things or the mirror, who likes money, lush banquets, sumptuous mansions, refined costumes, luxury cars, would advise you to notice what is happening in His heart and pray that God will release him from these bonds. The one who has a liking for all these things, please, do not get into politics, do not get into a social organization or a popular movement, because it is going to do much harm to itself, the neighbor and it will stain the Noble cause that peaks. Do not even get into the seminar. Faced with the temptation of corruption, there is no better antidote than austerity; That moral and personal austerity.

Corruption, arrogance, and the exhibitionism of leaders increase collective disbelief, the feeling of helplessness and feedback of the mechanism of fear that holds this wicked system.

In conclusion, Pope Francis quoted the late Afro-American leader, Martin Luther King, who opted for fraternal love even in the midst of the worst persecutions and humiliations: “When you rise to the level of love, its great beauty and power, The only thing you are trying to defeat is evil systems. To people trapped in that system, you love them, but you try to defeat that system. (…) Hate by hate only intensifies the existence of hate and evil in the universe. If I hit you and you hit me, and I hit you back and you give it back to me, and so on, it is obvious that you reach to infinity. It just never ends. Somewhere, someone must have some sense, and that’s the strong person. The strong person is the person who can break the chain of hatred, the chain of evil “(3).